Now is the time to schedule a trip to catch those hard fighting chinook salmon! Fresh out of the Pacific, these bright silvery bullets put up a tremendous fight and are delicious on the barbeque. For questions or to book a trip, call Ron at 541-425-1318

2022 promises to be another good year for chinook salmon entering the Rogue River bay. These hard fighting, silvery fish begin entering the bay in July and continue until early October.  Call Ron at 541 425 1318 to schedule your trip.

The bay fishing at the mouth of the Rogue River will be here before we know it. I’m already booking clients for the prime August to early September period. The first fish will show up in July and a few will still be coming until early October. If you want to get a chance of hooking some of these hard fighting, chrome bright chinook. give me a call soon!!

Fishing for big salmon on the south coast of Oregon is coming up fast. I begin trolling the Rogue River bay in late July and continue there and on the Coquille bay into early September. To encourage more people to get out fishing, I am offering a discount for disabled anglers this summer. Due to covid 19, I will also be disinfecting all equipment between clients and encouage any that wish to bring hand sanitizer and wear masks to do so.

With chinook salmon ranging from 15-25# and a few bigger, I’m looking forward to another great fishing season! Call today to make your reservation. 541-425-1318

The first springers of the season have been taken in the past few weeks from tidewater up river over 20 miles. But this is just the beginning. From now through early June these big, hard fighting fish will be pouring into the Rogue. The peak of the run will be from mid April to mid May. I fish this run out of a covered, heated boat so even if it”s wet or cool, we can keep comfortable.

For those unlucky anglers that didn’t make it up to the Rogue last summer, you missed out! We had what most people called the best fishing in the last 15-20 years. From late July until late September the fish just kept coming. As usual, my best fishing was from mid August until mid September but most of the season was excellent! Another good run is projected for this coming season. If you couldn’t make it last year be sure to give me a call and come fishing in 2018.

Big, bright chinook salmon will begin streaming into the Rogue River within the next month. These hard fighting fish average around 20# with a few up to 40#! The action continues through September with the peak from mid August thru mid September. In mid August the Coquille River, just north of the Rogue, begins to get it’s run of these beautiful fish. Plan your trip soon as it starts to get very busy in the next few weeks.

On a related note, the ocean salmon fishing off southern Oregon is closed this summer to protect the Klamath River and Sacramento River fish that make their way down our coastline. All the rivers and bays in southern Oregon are open for fishing as usual. In fact, the ocean closure should make the river fishing better since no salmon will be harvested before they enter their home river. Tight Lines in ’17!!

The first spring salmon should be entering the Rogue River within the next couple of weeks. By late March there are usually enough fish in the river to make it worth a concerted effort. I will begin guiding for springers the first week of April and continue into May. How long into May depends on numbers of fish and river conditions. With all the rain and snow pack this year, there should be plenty of water and good conditions through the season. After springers, I head to Alaska to guide a few weeks during the peak of the Nushagak River chinook run and then back to Gold Beach for bay fishing by late July-September. Last summer was very good fishing most weeks in the bay and I’m expecting another good year in 2017. Call if you’d like to join me on the Rogue or even in Alaska (541-425-1318).

The Rogue River has climbed to over 70F the past few weeks which means lots of fresh chinook salmon are holding down in the Rogue Bay. Many of these returning fish will be milling around for the next couple of months waiting for cooler river temperatures to begin their upriver migration. That translates into great news for us bay anglers! Come on over to Gold Beach to get out of the heat and try to a hook a big salmon or two. 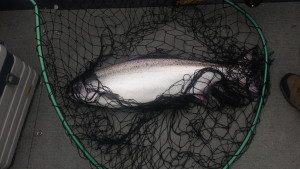 Big bright winter fish have been pouring into the Rogue since early December. High water recently has kept anglers from harvesting them but when the rains subside it should be great fishing again. I have several dates open the last week of January so give me a call if you can make it.

Don’t forget, springer season is fast approaching! The first fish are usually caught in late February with good numbers appearing by late March. With this winter’s abundant rainfall and snow in the mountains, the fishing should continue strong through May. Just call 541-425-1318 to schedule a trip.