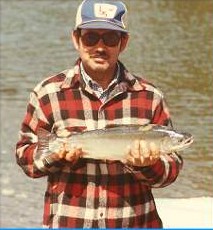 Beginning in early August good numbers of these hard fighting Summer Steelhead begin to show up in the lower Rogue River.

Many of them are what are referred to as “half-pounders”(13-18 inches) on their first trip back to freshwater.

Though fairly small, they are great sport on fly rods or light spinning gear. For the best results during hotter weather, we fish early to get the best catch. Most half-pounders are caught at this end of the Rogue — Some of these fish are on their second or third migration and weigh up to 10 pounds!

More about the Region:

The Southwestern Oregon region we fish, boasts the best Salmon and Steelhead fishing streams in the Northwest !

Southwest Oregon has one of the most breathtaking coast lines in the United States. Seldom will you find so many opportunities to enjoy nature in such a pristine environment.

These rivers are home to Oregon’s premier runs of salmon and steelhead giving anglers year round fishing options. From 40 pound hard fighting Chinook salmon to acrobatic steelhead, there is a variety of fish to match everyone’s angling dreams.